Mayor Naheed Nenshi said the MAX service will allow transit customers to get around the city efficiently without always having to head downtown to transfer to another CTrain or bus line.

“The system we had built around the amazing CTrain was really shuffling people in and out of downtown in a ‘hub-and-spoke’ model,” Nenshi said.

“The MAX network, which when fully built out will have seven or eight different lines, is really about getting people from school to work to home in a much more efficient way.”

The city has budgeted $304 million for the entire network, which will include heated shelters, next-bus arrival time displays and dedicated bus lanes to bypass traffic. A fourth MAX route in southwest Calgary is still under construction and will open for service in 2019.

The launch of the MAX Purple, MAX Teal and MAX Orange lines will also mean big changes to more than two dozen other bus routes, leading city officials to urge transit commuters to plan ahead to ensure they catch the right bus on Monday.

“Leave early on Monday, everyone’s going to be confused about what buses they’re going to take,” the mayor said.

The service will benefit from dedicated lanes, signal priority for buses at traffic lights and fewer stops.

Calgary Transit director Doug Moran said he doesn’t expect a big effect on traffic when the system rolls out Monday. He said bus drivers have been training on the transitway for the past two and a half weeks.

MAX Orange, the northern crosstown route, will link Foothills Hospital, University of Calgary, SAIT, Peter Lougheed Hospital and the Genesis Centre. It will also link CTrain stations in the far west and east, so riders don’t have to go downtown to transfer. 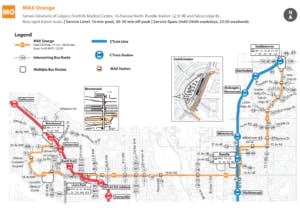 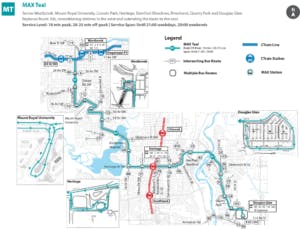 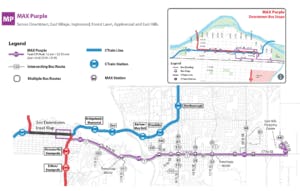